I’m not really sure which are worse – the entirely clear jeans, or the clear knee jeans. Obviously the clear jeans are absurd (or dumb, as GFY says), and anyone who wears them is beyond salvation.

But … there may be some people who think the clear knee jeans are bordering on wear-able.  And they aren’t. That may be even worse.

They do NOT transcribe.

And out of their tiny minds.

I’m just embarrassed for any woman of any age who buys clear knee jeans. Dear God.

The bus shelter in front of my office building has carried this Holt Renfrew ad for the past several weeks. I cringe in embarrassment every time I walk by it:

Any woman who thinks that this ridiculous outfit – what is apparently a swim suit, under a trench coat, with 6″ pink platform heels – is appropriate for any conceivable kind of event, be it party, beach, backyard, workplace, or even Halloween, is out of her mind.

Is this an indictment on the advertising world, that they think women are so gullible as to wear preposterous costumes like this? Or is it an indictment on women because, let’s face it, some gal somewhere must be forking out real $$ for this shit.

So ends my little rant.

11 years ago this evening, Paula and I were off to our Paris adventure. My favourite place, the Rodin museum. 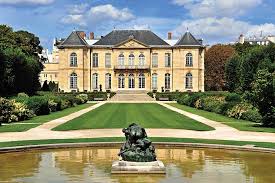 My sister-in-law is in Rome eating pizza and visiting the Vatican.

I’m revising data-sharing contracts, working like a dog, and can’t figure out anything to do for my 25th wedding anniversary.

I need to reprioritize my life. Paula, we need to plan another trip. Stat.

(Argh. For some reason WordPress refuses to make this a clickable link. Argh.)

I loved her writing. Just pulled out my copy of Postcards from the Edge -hardcover, first edition, 1987. 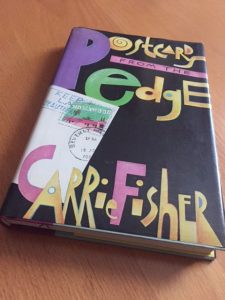 And I read her follow up novels, Delusions of Grandma and Surrender the Pink.  And of course, Wishful Drinking.  Here’s my little Carrie Fisher book shrine: 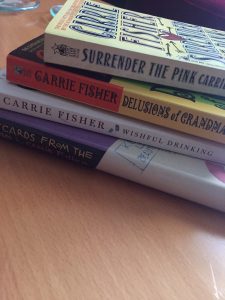 I also love her character Marie in When Harry Met Sally. A movie and a role that grows on me with every watching.

Everybody thinks they have a sense of humour and good taste, but they couldn’t possibly all have good taste.

I want you to know, I will never want that wagon wheel coffee table.

Written by my hero Nora Ephron, of course.

Recolor is a very diverting app. 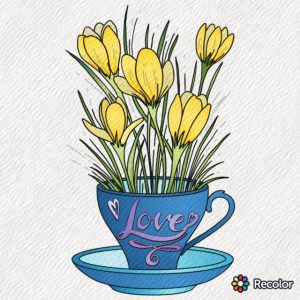 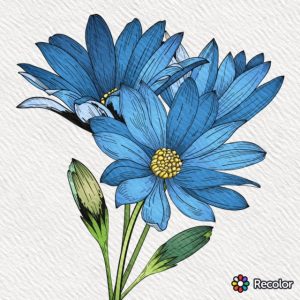 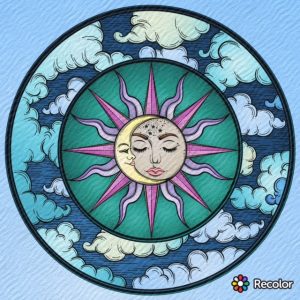 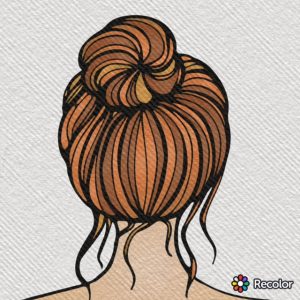 Barb and I went to the ballet this week. Four short pieces. Each one perfect in its own way. Still thinking about Genus, which was brilliant. About figuring out how the body works, what it can do, what it should do. About individualism and becoming part of a community. At least those were the themes that I took away. Possibly the best dance movements I have ever seen.

As we were talking about our daily minutiae, during intermission over the mandatory glass of bubbly, Barb happened to mention that she needed to organize her sock drawer. I was taken aback. How can a sock drawer become disorganized? One pairs the socks as part of the laundry process and puts them away, happily coupled and awaiting mutual use. But NO! Barb’s socks are unpaired in her sock drawer. Deposited uncoupled and alone, willy-nilly. Holy Mother of God. I’ve never heard of such a thing. “I don’t think I could sleep in a house like that,” was my only logical response.

On the way to the subway the next morning, I thought about Barb’s willy-nilly socks, and my reaction was confirmed. I could not sleep if I had unpaired socks in my drawer. I could not rest if Graeme’s socks were unpaired. I started thinking about what other minor bits of chaos would prevent me from sleeping: a cupboard partially open in the kitchen, a towel hanging askew in the bathroom, a painting hanging off-level.  If I knew about them, I would have to get out of bed and fix them.

At lunch with Carol Anne yesterday, she 100% agreed. She A) could not fathom how a sock drawer existed where socks were not paired at all times (weird orphan socks from the dryer the only exception); and B) concurred that she could not sleep if she were aware of unpaired socks in her house.

And here’s how I know she wasn’t just humouring me: She told a story. Her partner wears just one kind of sock: plain white sports socks. At the gym recently, he noticed that one sock was tight and the other was slouchy. Reporting this to Carol Anne, she immediately had to go to his sock drawer, take apart all the sock pairs, and ensure that tight went with tight, slouchy with slouchy.

I feel much better now.