OMG. It has a remote. A heated headrest. Self-cleaning.

And it will be mine!

Set against these mosaic tiles: 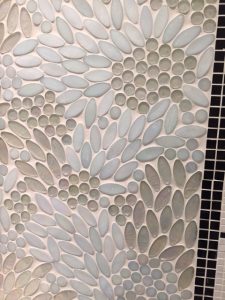 Her essay The Lost Strudel from I Feel Bad About my Neck. I read this very short piece on the subway one morning, years ago, and laughed out loud. And then re-read it immediately.

I’ve had a craving for cabbage strudel ever since (which objectively sounds disgusting), but I’m a bit afraid to try it, since it likely won’t live up to Nora’s praises (even Nora had trouble meeting her own expectations of strudel). And then I’d just be disappointed.  I’m sure Nora would tell me that’s not a healthy way to go through life (were she still with us).

I especially admire the line “I dropped Ed Levine’s name so hard you could hear it in New Jersey.”

Nora Ephron’s tribute to Meryl Streep. Brilliant, funny – and her delivery is impeccable.  The crowd is mesmerized — when she talks about going into Meryl’s trailer at the end of her tribute, the entire audience of celebs and self-important people hang on her every word:

Plus – what a great outfit, right?

From NYC:  Watching the traffic on 5th Avenue and the skaters in Central Park: 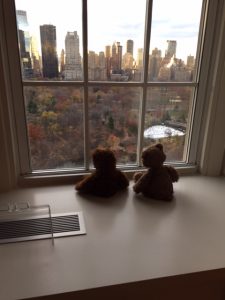 And from Antigua:  Counting the pelicans and asking for rum punch: 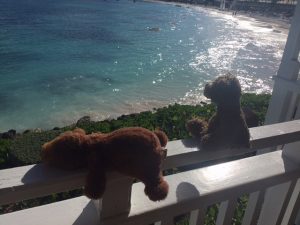 I’m a big fan of Nora Ephron.  I first fell in love with her through the short essays she published late in her life, I Feel Bad About My Neck and I Forget Everything.

One of her essays, in I Feel Bad About My Neck, was about the transformative power of great novels.  She wrote the essay having just finished reading The Amazing Adventures of Kavalier and Clay, a book I’d vaguely heard of but that’s about it.  She talked about being swept away in the world Michael Chabon created, and crying when one of the characters died.  And a lot more than that.

I didn’t rush out and buy K&C the first time I read I Feel Bad About My Neck, but the second or third time I did. It was December 30, 2015; I know because I kept the receipt in the book as a future bookmark.

I didn’t start reading K&C on December 30, 2015, for a couple reasons at least. First, it’s a doorstop, and I knew I’d need a good swath of time to dive into it and finish it.  And second, I’ve been on a bad reading streak for a couple of years now. Reading far too much crappy chick-lit and fluffy fare; easy for the subway, easy for the brain.

I just finished a two-week vacation in Antigua, where I go with hubby (ideally once a year) to get away from work, clients, contracts and colleagues and to indulge in a good mental health break and reading jag. 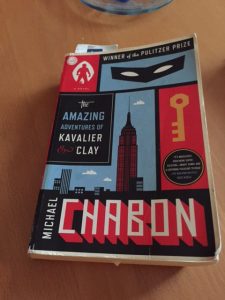 K&C was the third novel I picked up to read, sitting on a lounge chair beside the quiet pool we frequent. I knew it was going to be good from the first and second pages; I had to put the book down, run to our room and get a pen. There were sentences and phrases I had to underline because they were so perfect. Sammy Clay is described as disheveled on the first page (like he’d just been “jumped for his lunch money”), and exhausted Josef Kavalier is described soon after, slumped “like a question mark” against Sammy’s door after a dramatic escape from Prague to Brooklyn. I may be remembering these turns of phrase incorrectly; I don’t have the book beside me, but I hope I am because they jumped off the page. And that was just pages 1 and 2.

K&C was a bit of a battle of the inner wills for me. The prose is sumptuous. It cries out to be read out loud. Now I understand why John Irving’s Dr. Larch read to the orphans from Charles Dickens every night in Cider House Rules. Sometimes a book doesn’t really come alive unless the words are read out loud, rolled off the tongue, and truly heard and appreciated. The book made me wish, once we were back at home in Toronto, for an ice storm or a thunder storm – something to knock out the power for an extended  period (but not too extended period –it’s winter mind you), just to have an excuse to light some candles in the darkness and read the book aloud to Graeme. I thought he would enjoy it. Now he’s across the aisle on the airplane reading it; I hope he’s enjoying it.

But the prose battled every page with the plot. I’m a big fan of plot, with big stories and big characters. One of my earliest favourite books, possibly still my faviourite book, is Irving’s The World According to Garp.  K&C reminded me of Garp a lot. It reminded me of his Hotel New Hampshire and A Widow for One Year.  It made me want to read Garp and New Hampshire again.  Big juicy audacious reads.

Back to K&C – I repeatedly struggled with savouring the prose vs. skimming ahead to find out what would happen next.  Would Rosa Saks remember that Joe Kavalier was the young man who walked in on her naked in bed in the artists’ den, on the day that K&C create the Escapist? Would Joe rescue his family and bring them to America? Would Sammy find love or lust with Tracy Bacon?  (I loved Tracy – “Mensware?” he says as he leaves the elevator of the Empire State Building to meet Sammy on his volunteer watch for air raids over Manhattan. “Do you have anything in a gabardine?”)

Did I love K&C as much as Nora? I don’t think so.  I loved a lot about it, obviously. Especially the first three parts.  Part Four, Radioman, almost killed me. The shortest of the five parts, it was brutally bleak. Joe Kavalier has volunteered for the Navy to avenge his family’s fate in Nazi-occupied Prague, and a more recent tragedy, and ends up in Antartica of all places on an apparently pointless mission, literally sleeping with the dogs.  Radioman gets bleaker from there, reminding me of the once book club favourite A Fine Balance, where the protagonist ends up limbless on a skateboard at the end of the novel. I mean, holy shit, shoot me now. I felt like that about Radioman.  I suppose its purpose was to test and then restore Joe’s humanity; but it crushed my soul a little bit (did they have to shoot Oyster??), and then Part Five was a bit of a letdown for me too.  I kept comparing it to Garp, which I’m going to re-read, and maybe on re-reading its end will let me down. But it’s hard for any novel, even K&C, to compare to that ending.

I also re-read Nora’s essay, and her love of the book makes me love it that much more.  Let’s cross our fingers for a short-lived ice storm or a lengthy winter thunderstorm. I’ll get the candles and K&C.

You can (and should) read Nora’s essay here: 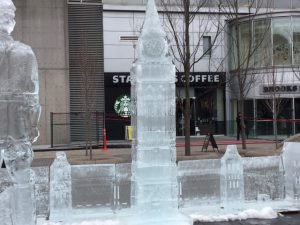 And week before – beach in Antigua. 28C 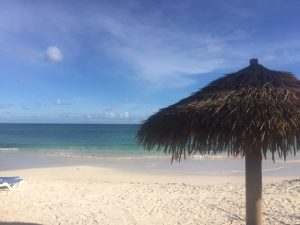 I’ll take the beach.  Notice beach is in colour; Toronto in black and white. Or grey.

I finally finished Miller’s Valley on vacation last month, and I have to say, my least favourite Anna Quindlen ever.  And I love her work -especially One True Thing, Blessings, and Still Life with Bread Crumbs. And her essays, including Lots of Cake, Plenty of Candles (which I recommend every woman of a certain age to read).

I really disliked Miller’s Valley‘s narrative voice (flat, resigned). It didn’t make me motivated to see the story through, which is why I kept putting it down and reluctantly picking it back up. I wasn’t interested in the narrator, quite frankly (although you would think I would be interested in a smart, studious female narrator).  Mimi was bland.

The central plot of the government flooding her valley was an inevitability (and presented as such); there was no narrative tension at all.  Water’s a standard metaphor for the relentlessness of time, death, etc., and it worked, but it wasn’t fresh.

I also wasn’t captured by the subplot involving her agoraphobic aunt Ruth and the “did they or didn’t they” speculation involving her father and Ruth. Meh. I’m not sure the final discovery in the attic explained everything (or anything) about Ruth.

I do love her writing, but didn’t love this book.