I drove up to Owen Sound this week for work. When it’s good weather, and it was for January, it’s not a bad drive. Highway 10 passes through lots of small southwestern Ontario towns, including one called Primrose just outside of Shelburne. Lots of churches, gas stations, and diners along the route. Fruit and vegetable stands at the side of the road in the summer, I imagine.

At the corner of Hwys. 10 and 89 (a “major” intersection on the route), an odd juxtaposition caught my eye. On the northwest corner, there’s a burger joint called “Super Burger”. And then right across the highway, on the northeast corner, there’s another burger joint called “Champ Burger”. They both look a bit neglected, at least from my vantage point. But they are clearly rivals. One’s ‘super’ (like Superman), one’s a ‘champ’ (like Rocky). (I’ll let the comic book nerds tell me who wins in a Superman vs. Rocky fight. I pick Superman.) 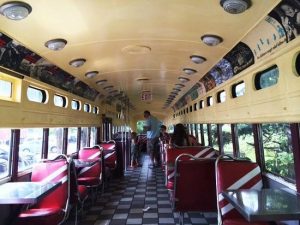 I just knew there had to be a story there. My imagination got working, and I envisioned a whole saga of friendship/love, ambition, and partnership. Building a business together, and then a misunderstanding, a fallout, a sordid break-up. Culminating in … a betrayal. A knife in the back; calculated revenge; cut-throat competition; and finally a burger joint rivalry right across the highway! Possibly theft of an old family BBQ sauce recipe in the mix.

Is this the foundation for the great Ontario novel? Local eccentrics, small town politics, big egos and bigger insecurities. It was writing itself in my head. Although the names of the burger joints would have to be changed, because, let’s face it, they are kinda lame.

I lazily googled this morning, and as it turns out, there is a feud. The small town of Primrose is divided! Families are torn apart! Dad’s loyal to Super Burger (the original, called “venerable”), the kids to Champ Burger (the “upstart”). It’s like the civil war, brother vs. brother. Although really not so much.

Anyways, I think my version of the story is way more dramatic, and I may just write it. Think Waitress meets Dallas meets What’s Eating Gilbert Grape. Although I like the tourist vs. locals angle. I think I’ll use it.

Feel free to option the film rights now, while they are still available!

3 thoughts on “Super Burger vs. Champ Burger: my great novel-to-be”