Don’t get me wrong. I like shopping at Nordstrom and The Rack as much as the next woman who’s looking to fill that hole in her soul with a new pair of jeans, cute little booties, and a cashmere sweater. I’m in.

But there’s apparently a segment of Nordstrom buyers who have lost their GD minds. My husband says his family is afflicted with the curse of the “Coffin Compromise” – that’s when you pay far too much money for something that’s really a piece of crap.

Ladies and Gentlemen of the Jury, Exhibit A – I’ve been mauled by a puma 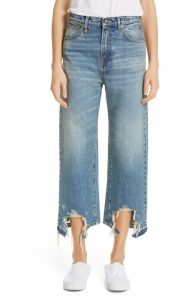 These are called “chewed-hem” jeans. In Nordstrom’s own words, which are intended to promote these jeans for sale:

The distressing on these slouchy nonstretch jeans suggests something with large teeth has mauled the hems.

There’s a shorts version too, that is also “off-kilter”: 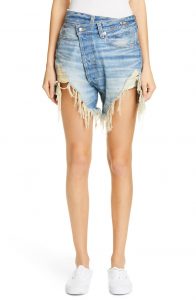 Again, in Nordstrom’s own words:

I looked up “off-kilter” in the dictionary. It means “somewhat ill; not completely well”. Which you would be, if a puma just attacked you and your shorts. And you paid $531 for them and they don’t even button up straight. (Aside: Why are the shorts the same price as the jeans – shouldn’t shorts for obvious reasons be cheaper that full-length jeans?)

This “off-kilter” thing seems to be a trend now: 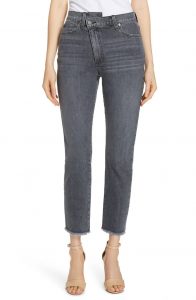 According to Nordstrom, it’s a “new slant” (guffaw) on skinny jeans, with an asymmetrical front closure. Or a factory error that’s been turned into a marketing opportunity. Only $414. 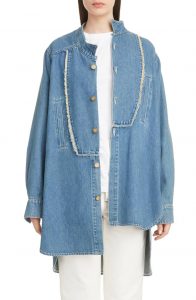 In Nordstrom’s words, this denim jacket has more “off-kilter styling” with a “misaligned placket” and “mussed wing collar”. Isn’t this code for, we really screwed up, but now we’re saying “I totally meant to do that”, and now it’s $1400?

Exhibit C – Make up your mind

If choosing the colour of your jeans in the morning is the hardest decision you have to make all day, you need to get a job like mine. 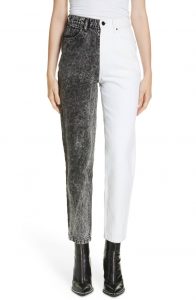 These are “bicolour” jeans. Black jeans are great. White jeans are cool. Pick a team. Make a decision.

I initially looked at these jeans and thought, OK, kinda cute, pretty normal, but why $2K? 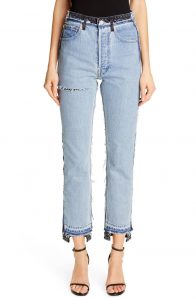 And then I realized – they are “pieced together” jeans: 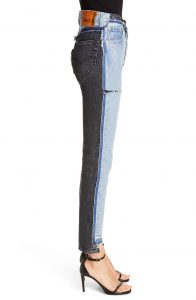 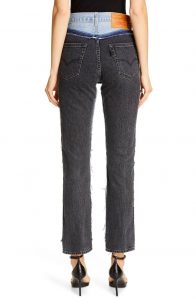 I mean, are they horrifically awful? I wouldn’t say so. No animal has gnawed them, so that’s a plus. But I’m not digging them. Pick a team: blue or black.

And then there’s this multi-colour atrocity: 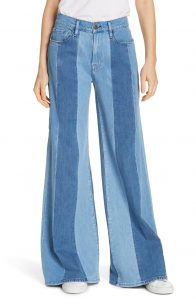 These are panelled wide-leg jeans that give you “an artsy reconstructed look”.

No, they are clown jeans. 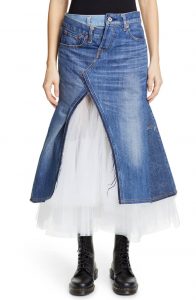 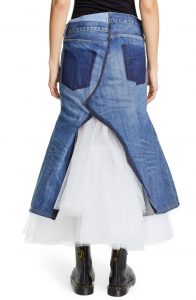 I am speechless. There are no adjectives.

And along the same lines – by the same designer – and only $3600, this denim jacquard tulle dress: 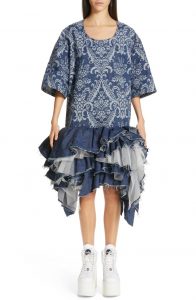 And somehow the back works two different ways (trying to figure this out): 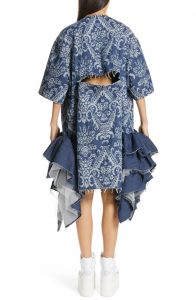 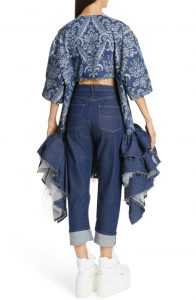 Not only is it ugly as hell, but it’s unflattering. The top is about as stylish as a hospital gown. The bottom is a schizophrenic hot mess.

On the bright side, to show that I’m fair-minded, Nordstrom’s denim offerings include some pieces that I can totally get behind. I couldn’t possibly wear them, but I get why someone who’s sane and stylish would: 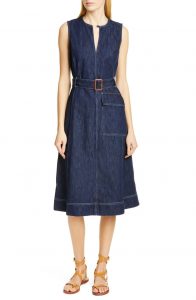 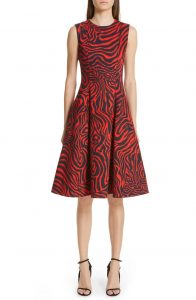 Ditto this zebra-print Calvin Klein A-line. My law partner MJ would rock this. She’s sane, stylish, and super conservative. She would never pay $1400 for a dress (nor would I), but this would look great on her. 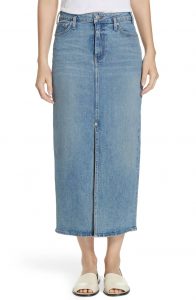 I had a jean skirt very like this in undergrad and wore the hell out of it. $440. I wish the model was wearing cute booties with the skirt – and a cashmere sweater: 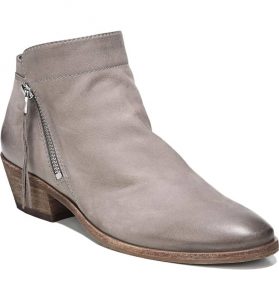 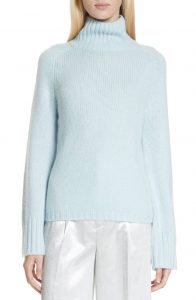 And it received so many unduly positive comments that I’m worried I look like a horrible slob 99% of the time. (I do wear jeans pretty much every day …) 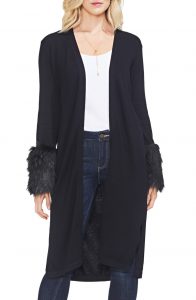 Vince Camuto “faux-fur” cardigan. I thought I looked like a 1970s pimp (i.e., I could hang around with Huggy Bear on Starsky & Hutch and we’d blend).

Franca said it was more Prince circa Raspberry Beret. I’ll take that. But then it really should have been purple.

Hey – if Vince Camuto sold that cardigan in purple, I’d totally buy it. 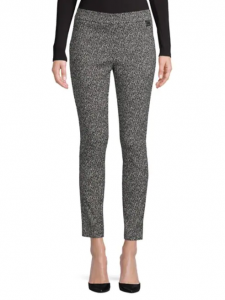 I have to say I do like these Calvin Klein black & white stretch pants.

And a bold print b&w top: 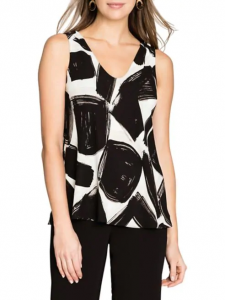 Doesn’t seem particularly remarkable. I guess I need to up my game. 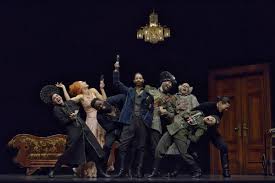 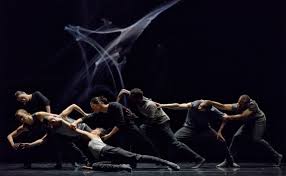 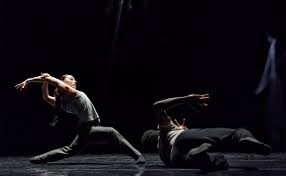 I spent this Saturday afternoon starting to finish my nine (!) rug hooking projects that I’ve completed since last summer. So happy my sister-in-law Anne introduced me to rug hooking and Deanne Fitzpatrick’s studio in Amherst, Nova Scotia. Since then … hours of calm creating these rugs. And a few hours of frustration. The Wave (picture below) was a real challenge for me.

Graeme keeps asking … what are they for? They aren’t for anything. They are for me. What are you going to do with them? Who knows. Anne says some of them can be used as coasters for my coffee.

But the next thing I need to do with them is finish them. They need to be steam-ironed, cut to size, with edges crisply folded. Then the backings get sewn up nice and neat.

Turns out I really like 3/4 of that finishing process – and I got all rugs 3/4 done. But the sewing is not my forte, I’m afraid. I can sew, it’s the “nice and neat” part I struggle with. Looks like I had a seizure when I sewed up Mr. Sheep below. It’s a bit scary, but who looks at the back anyways? Right? I’m hopeful, but not at all convinced, I’ll get better as I work my way through the other 8 rugs. 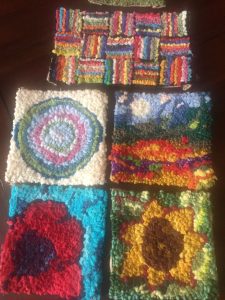 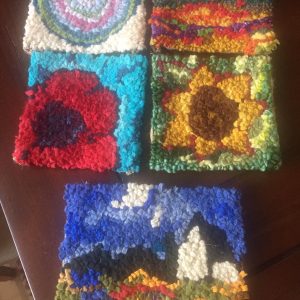 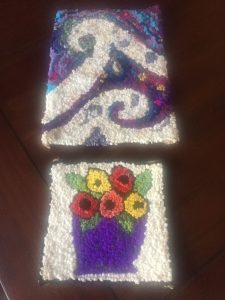 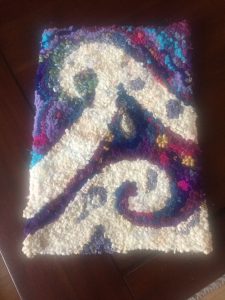 Fun compare/contrast – here’s a picture of Anne’s Wave, from the same kit (granted colours do vary). But she really made it her own. I love it. Plus, her stitches are beyond perfect and I’m jealous. 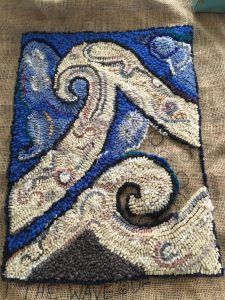 Anne has since finished it:

Anne’s rug hooking is at a level I don’t even aspire to. Perfect stitching. She creates her own patterns! Come on.

Graeme says I’m horribly envious, but I like to think that I am unburdened by the strive for perfectionism that afflicts Anne (aka content to be crappy!)